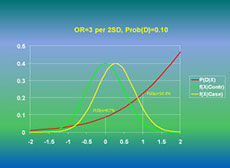 Welcome to Nancy Cook’s page in the Division of Preventive Medicine! This page focuses on reclassification and other methods of assessing and comparing risk prediction models, and provides software in SAS and links to R programs.

Risk prediction equations are used in a variety of fields for risk stratification and to determine cost-effective and appropriate courses of treatment. The Framingham risk score for cardiovascular disease (CVD) has been widely used for establishing guidelines for treatment with cholesterol-lowering medications. Whether new risk predictors can add clinical utility is an important question in cardiology as well as in other fields of research.

Traditionally, risk prediction models have been evaluated using the area under the receiver operating characteristic (ROC) curve, but this can be an insensitive measure for model comparison, and has little direct clinical relevance. Since its description in 2006, much interest has been generated in reclassification, which assesses the ability of new models to more accurately classify individuals into higher or lower risk strata. This has led to new methods of evaluating and comparing risk prediction models, including the reclassification calibration test and the net reclassification index (NRI). Extensions of the NRI to survival settings have now been introduced, as well as a continuous version that eliminates the need for categories. Debate about these methods continues to evolve, and research on their interpretation and use remains ongoing.

We first described using reclassification tables to compare models in an applied paper looking at the influence of CRP in predicting risk in women in the WHS:

The use of reclassification as well as a discussion of receiver operating characteristic (ROC) curves was further described here:

And we described these methods and their performance in the WHS data:

We described the statistical performance of the new metrics in simulations in:

We have also published on the use of the continuous version of the NRI, on the NRI for clinical subgroups, and on measures of fit using survival data. Please see the publications list for more references.